Another very strong quarter in the North Bay real estate market: Year over year, the median house sales price in the second quarter was up 25% in Marin and Sonoma, and 34% in Napa. Though there are a number of dynamics behind the rise in median price, including the large decrease in distressed property sales and large increase in luxury home sales, home values have clearly been rapidly appreciating over the past year, and especially in 2013, as buyer demand soared and inventory stayed low. 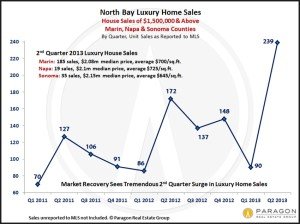 North Bay Luxury Home Sales
In this chart, luxury houses are defined, rather arbitrarily, as those selling for $1,500,000 and above: Sales of such homes surged in the second quarter, just as they have around the Bay Area. North Bay high-end sales are concentrated in Marin, but Napa and Sonoma also have significant luxury home segments. 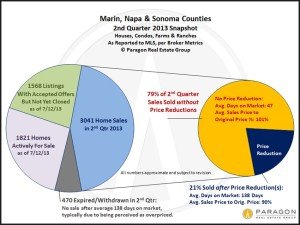 North Bay Market Snapshot
79% of second quarter sales sold quickly without price reductions at an overall average of 1% over list price. 21% of sales sold after one or more price reductions at an average discount to original list price of 10%. And some listings didn’t sell at all, but ended up withdrawn from the market, typically due to being perceived as overpriced. Note the huge disparity in average days on market for those homes selling with and without price reductions: Pricing correctly makes a huge difference in market response. 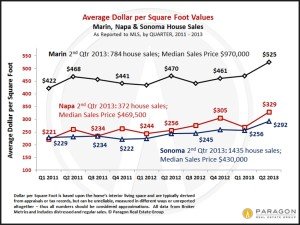 Trends in Average Dollar per Square Foot Values
As with median sales prices, the trajectory in dollar per square foot values has been significantly upward over the past year. Note also that Sonoma has far more house sales than Marin and Napa combined. As a point of comparison, last quarter in San Francisco, there were 720 house sales, the median price was $996,000 and the average dollar per square foot value was $687. The city’s recovery started somewhat earlier than most other counties in the Bay Area, and its overall median sales price has now exceeded previous peak values in 2007-2008. Marin is approaching the same threshold, with the other 2 counties’ median prices, much harder hit by distressed home sales, still distinctly below peak values. 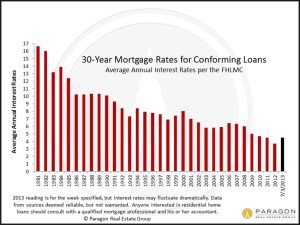 Interest Rates: The Sky Is Not Falling
Not to diminish legitimate concerns regarding rising mortgage rates and their effects on housing costs, but this graph puts recent increases in context. At any time before 2011, the current interest rates, even after their recent big percentage jump, would be reason for conga lines of celebration in the streets. Rates had to rise from their historic and artificial lows – how far and fast this may continue is unknown to us, but we don’t presently expect big shocks to the real estate market in the near future. 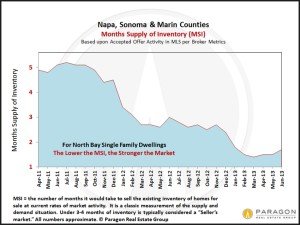 Months Supply of Inventory (MSI)
Inventory began to creep up in the second quarter, but supply as compared to demand remains very low by any historical measure. This, of course, is the major dynamic behind rising home values.

And this link goes to a chart that tracks the actual unit inventory of homes listed and available for sale by month: as can be seen, units for sale remain far, far below levels of previous years:
Homes for Sale